Tributes paid at the funeral of Simon Dobbin

Around 200 people lined High Street in Mildenhall to pay their respects to Simon Dobbin, who had his funeral today.

Simon, 48, died in his sleep at his Mildenhall home on October 21, five years after the Cambridge United fan was attacked by a group of football hooligans in Southend that left him needing 24-hour care and being unable to walk and talk.

Fellow United fans paid tribute to him by wearing shirts, scarves and holding banners and flags. One who attended was Grant Norman, who felt great sadness for Simon's family.

He said: "It is tragic that we find ourselves at this point, all Simon Dobbin ever did was go to an away game for Cambridge United and he and his family suffered five years from it.

"It must be horrible for his wife and his daughter today, who have cared for him for so long, we can not imagine how this is for them, such a sad and terrible day."

The mourners on the street fell silent as the cortège, including Simon's wife Nicole and daughter Emily, drove slowly up High Street before pulling up outside St Mary's Church.

The wicker coffin with Simon's senior aircraftman's cap, as he was stationed at RAF Honington between 1996 and 1999, rested upon it was then carried into the church for a private service due to restrictions.

The service, taken by Reverend Sue Leathley, included the songs Yellow by Coldplay and You'll Never Walk Alone, by Gerry and the Pacemakers.

When the procession returned, the street fell silent again, as a lone bugler played The Last Post. 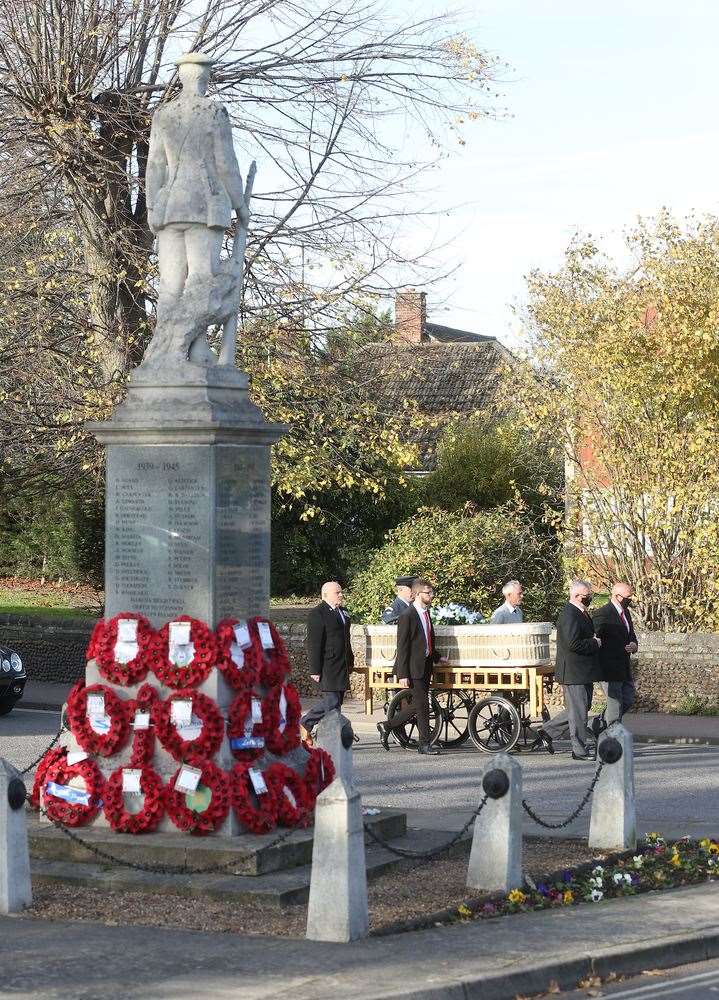 Simon's coffin, now on an antique funeral bier, pulled away from the church with people giving him applause before following the procession to Mildenhall Cemetery, where he was laid to rest.

The family has asked if anyone wishes to make a donation in Simon’s memory, they can make it to the the RAF Benevolent Fund by contacting funeral directors GR Peachey & Son of Mildenhall, on 01638 713201.