These are 10 of the things that put Suffolk on the map, from the Magna Carta to Ed Sheeran, and Ipswich Town Football Club to Latitude Festival

After a video of a US airwoman finding out she was being posted to a Suffolk base went viral this week, we answer her question 'where is that?'

We've put together a list of 10 things that have put the county on the map.

While some of the reasons date back centuries, others draw people to the area to this day.

1. Its beautiful coast... and the most easterly point in the UK

From Lowestoft to Felixstowe , and boasting the beautiful beaches of Southwold and Aldeburgh in between, Suffolk's coast is second to none.

These locations are popular holiday destinations, and it's no wonder why when they feature a multitude of attractions, including Pleasurewood Hills in Lowestoft, Africa Alive in Kessingland, Southwold Pier and Landguard Fort in Felixstowe.

The county's coast is bookended by two of the country's extremes.

At one end, Felixstowe lays claim to Britain’s biggest and busiest container port, and at the other, Lowestoft has the UK's most easterly point, Ness Point.

2. The Home of Horseracing

Those are not the only things that Suffolk can claim that no other part of the UK can. Within its county borders is the Home of Horseracing.

Newmarket is pretty much synonymous with horseracing, with its training centre, famous racecourses - the Rowley Mile and the July Course - and the National Horseracing Museum.

The town celebrated a milestone in 2016, as it marked 350 years since King Charles II instigated the Newmarket Town Plate in 1666.

It was regarded as the birth of modern, organised horseracing, as it was the first recorded horserace in history to be run with a specific set of rules. There were historical references to racing in the town prior to this though.

Charles, who became the first and only reigning monarch to win a race in 1671, stated that the Newmarket Town Plate should be run 'for ever' – and it has been, with the exception of this year due to the coronavirus pandemic.

These days, the racecourses welcome more than two million people a year for some of the UK's biggest racing events.

3. An abundance of history

Speaking of history, there's plenty of places in the county where it's possible to find evidence of the lives of previous residents.

Suffolk boasts a number of areas of archaeological interest – such as the Anglo-Saxon sites of Sutton Hoo and West Stow.

Archaeologists stumbled upon 'one of the greatest discoveries of all time' in 1939 – an undisturbed ship burial of an Anglo-Saxon king and his treasured possessions.

And at West Stow Country Park, there is a reconstructed village based on the site of an excavation between 1956 and 1972. More recently, a large Anglo-Saxon cemetery was discovered in Oulton near Lowestoft, which was described by officials as 'nationally significant'.

And that's just the Anglo-Saxon heritage!

Bury St Edmunds also has links to one of the most important documents in the world, the magna carta.

It was in the town that a group of Barons secretly met in Abbey of St Edmund in 1214 to swear an oath to urge King John to accept a 'Charter of Liberties' which laid down laws regarding the treatment of nobles, church officials and individuals.

This led directly to the Great Charter, or the Magna Carta, which sought to limit the powers of the monarch, and which was agreed at Runnymede a year later.

That's all without beginning to mention all the castles, country houses and historical buildings the county is home to as well.

With all that Suffolk has to offer, it's no surprise that celebrities want to make it their home.

One of the most contemporary names who comes to mind as soon as the phrase 'Suffolk resident' is uttered is singer Ed Sheeran.

Ed, who grew up near Framlingham, referenced the town's historic castle in the song 'Castle on the Hill', and ended his 2019 Divide tour with four homecoming gigs in Ipswich. 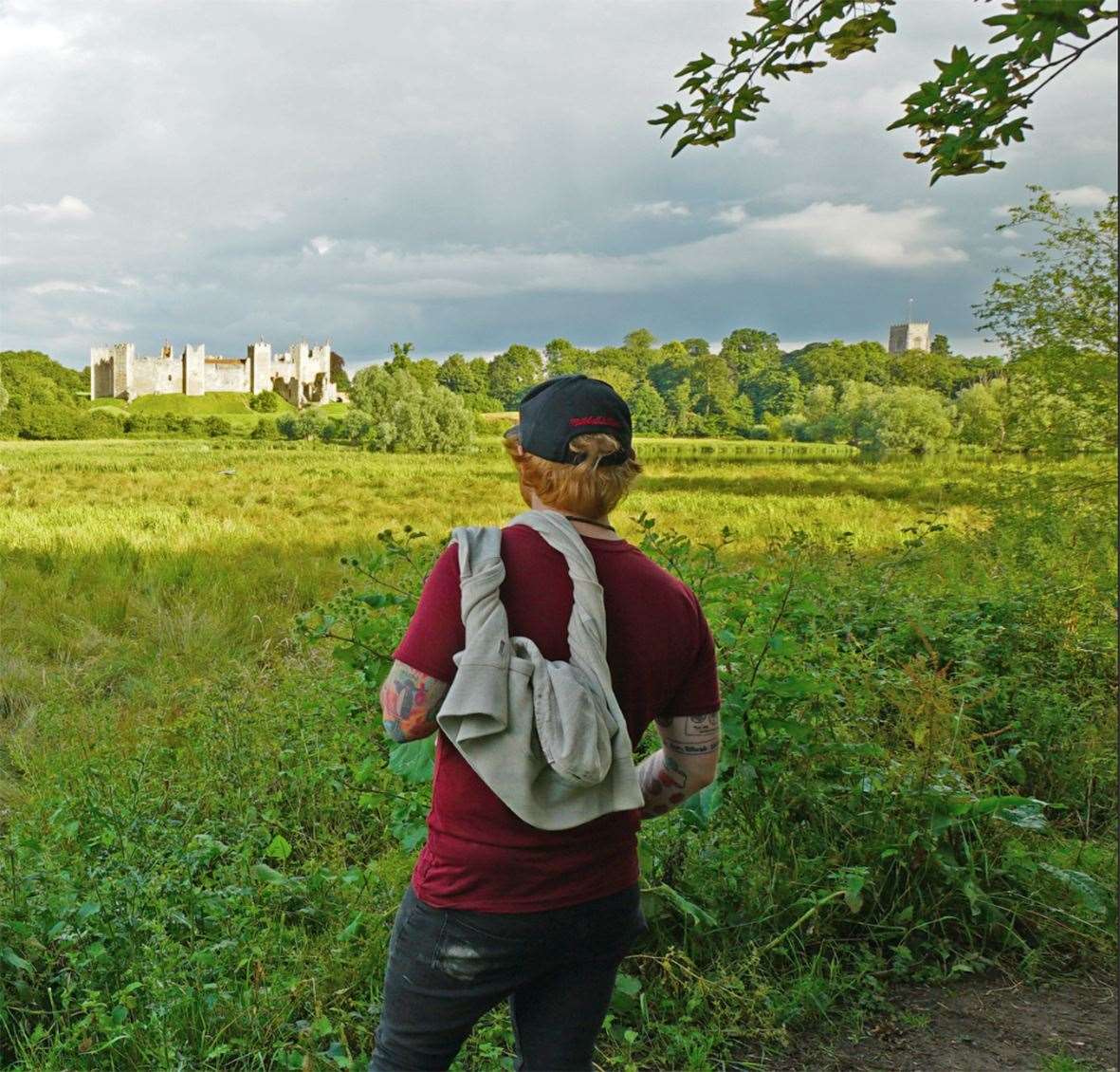 He currently lives on his own estate in the town with his wife Cherry Seaborn, and their new baby Lyra Antarctica.

Ed is also said to be the reason why Game of Thrones' acting couple Kit Harington and Rose Leslie moved to Suffolk, after recommending the county as a home. They live in a Tudor farmhouse in Brettenham, where they, too, are expecting the first child.

Suffolk hosts a plethora of events that many add to their calendar every year – although the coronavirus means many of them have had to be cancelled or postponed this year.

The county's annual two-day Suffolk Show held in Ipswich is organised by the Suffolk Agricultural Association and celebrates 'everything that makes the county great and showcases the best of Suffolk's food, farming and agricultural heritage'.

Unfortunately this year and next year's Suffolk Shows have been cancelled, but the association has said it is planning a 'fantastic' show in 2022.

Likewise, organisers of one of the county's biggest music festivals, Latitude, had to call it off this year – but in usual times, the event draws tens of thousands of people to Henham Park near Southwold, with headliners over the years including Florence and the Machine, Grace Jones, The 1975, The Killers and Sam Smith.

The festival plans to return in 2021 with headliners including Lewis Capaldi, Bastille and Snow Patrol.

And for those who enjoy long-distance running, the half-marathon the Great East Run is usually held in Ipswich every year.

6. Some of country's greatest painters

The county boasts some of the country's greatest painters and artists - from centuries past and modern day.

The painter Thomas Gainsborough (1727-88) was born and raised in Sudbury . His career saw him receive a commission to paint King George III and he became a founding member of the Royal Academy.

Gainsborough was the leading portrait painter in England in the later 18th century, although the National Gallery says his 'private inclination' was for landscape and rustic scenes.

Another of Suffolk's great painters was John Constable (1776-1837), who lived just 16 miles away from where Gainsborough was born in East Bergholt.

His paintings of Dedham Vale made him one of the most famous landscape artists of the 19th century.

And this area of Suffolk, which borders Essex, is known as Constable Country to this day.

Suffolk is home to some big brands, in particular in the world of alcohol.

And that's not all, as Aspall Cyder and Vinegar was founded by Clement Chevallier in the parish of Aspall in 1728.

So it's fair to say Suffolk has created some of the county's most popular drinks, as well some of the establishments in which to drink them!

One of the most famous sports teams Suffolk is home to is Ipswich Town Football Club, otherwise known as The Blues, The Tractor Boys, or The Pride of Anglia.

The club was formed in 1878, with the side playing amateur football until 1936, when they turned professional.

And Portman Road has been their home ground since 1884.

As of this moment, Ipswich Town FC is second in League One.

Of all the counties in England, there are only a dozen or so which do not have a city – and Suffolk is one of them.

The county town is Ipswich, which remains a town despite a few attempts at winning city status, and, although Bury St Edmunds has a cathedral, it is not a city – despite some city status bids there too.

Despite not having any cities, the county is packed full of heritage assets, beautiful architecture, nature, and celebrated businesses offering local produce.

Ending back where we started at the reason for putting together this list, Suffolk's Royal Air Force (RAF) links make the county stand out.

There were numerous RAF bases across the land during the Second World War, but nowadays, only a fraction of these are in use.

While RAF Honington is the home of RAF Force Protection, who are responsible for protecting the RAF at home and abroad, RAF Barnham, near Thetford , is expected to close in 2022.

And two of the county's other RAF bases are currently used by the United States Air Force (USAF) – RAF Lakenheath, which is home to the USAF's only F-15 fighter wing in Europe, and RAF Mildenhall.

Earlier this year, it was revealed that the plans to close RAF Mildenhall in 2027 had been scrapped, meaning the site has been reprieved and more people, like Jay in the viral TikTok video we mentioned earlier can discover why Suffolk is so special.