“It means a huge amount. Those races – the Guineas, the Derby, the Oaks, the St Leger – that is why every trainer gets into the game. You dream of having horses that have the ability to win one of those.”

It has been four years since Hugo Palmer saddled Galileo Gold to win the QIPCO 2,000 Guineas in impressive fashion.

And yet it could have all been very different, with Palmer – the last Newmarket-based trainer to savour a Guineas victory – initially eyeing up an assault on the French equivalent.

The son of Paco Bay, who was briefly owned by Colin Murfitt of Soham before being sold to Al Shaqab Racing, had won on three of his five starts in 2015.

Palmer had seen enough to suggest that a trip across The Channel would be the best course of action, but a bullish Frankie Dettori felt otherwise.

“Frankie sat on him once outside of race day – that was at Newmarket during the Craven,” revealed Kremlin Cottage Stables’ Palmer.

“He worked very well that day. He was always a great, fun horse to train because he never kept anything secret. He produced Group 1 performances at home and on the track.

“I recall asking Frankie whether he would be competitive in the French Guineas. He looked at me at bit stunned and confused, and then said: ‘This horse will win any Guineas I’ve ever ridden in. Why France? This is the Guineas’.”

Decision made, all roads now led to the Rowley Mile on the last Saturday of April.

Typically, the British weather refused to play ball, which did little to settle a rather tender trainer.

“It was a nervous couple of weeks after that to get him ready, but thankfully he was in great form and nothing went wrong,” said Palmer, who had been granted his licence five years earlier in 2011.

“It was a very cold day and I regretted massively not having an overcoat.

“I had a horrible hangover as well. We had some people over for dinner the night before and we decided to celebrate having a runner in a Classic – at that point you couldn’t truly believe he’d win it.

“I managed to scrape myself off the pillow for first lot and we went from there.”

One particularly sobering prospect for Palmer was the credentials of odds-on favourite Air Force One.

Aidan O’Brien’s stable star had won three Group 1s as a juvenile, and many felt that the 2,000 Guineas would be another straightforward assignment.

However, speaking at press conference in Newmarket shortly before the big day, Palmer pointed out that he had seen ‘lots of very short-priced War Fronts (Air Force One’s sire) getting beaten’ and highlighted how ‘Aidan has talked a lot about how he wants fast ground’.

It seemed now the trainer was as sanguine as his jockey, and ultimately he was right to be. While Air Force One flopped – finishing 12th in a field of 13 – a masterful ride from Dettori saw 14-1 shot Galileo Gold triumph by a length and half to Massaat in second. 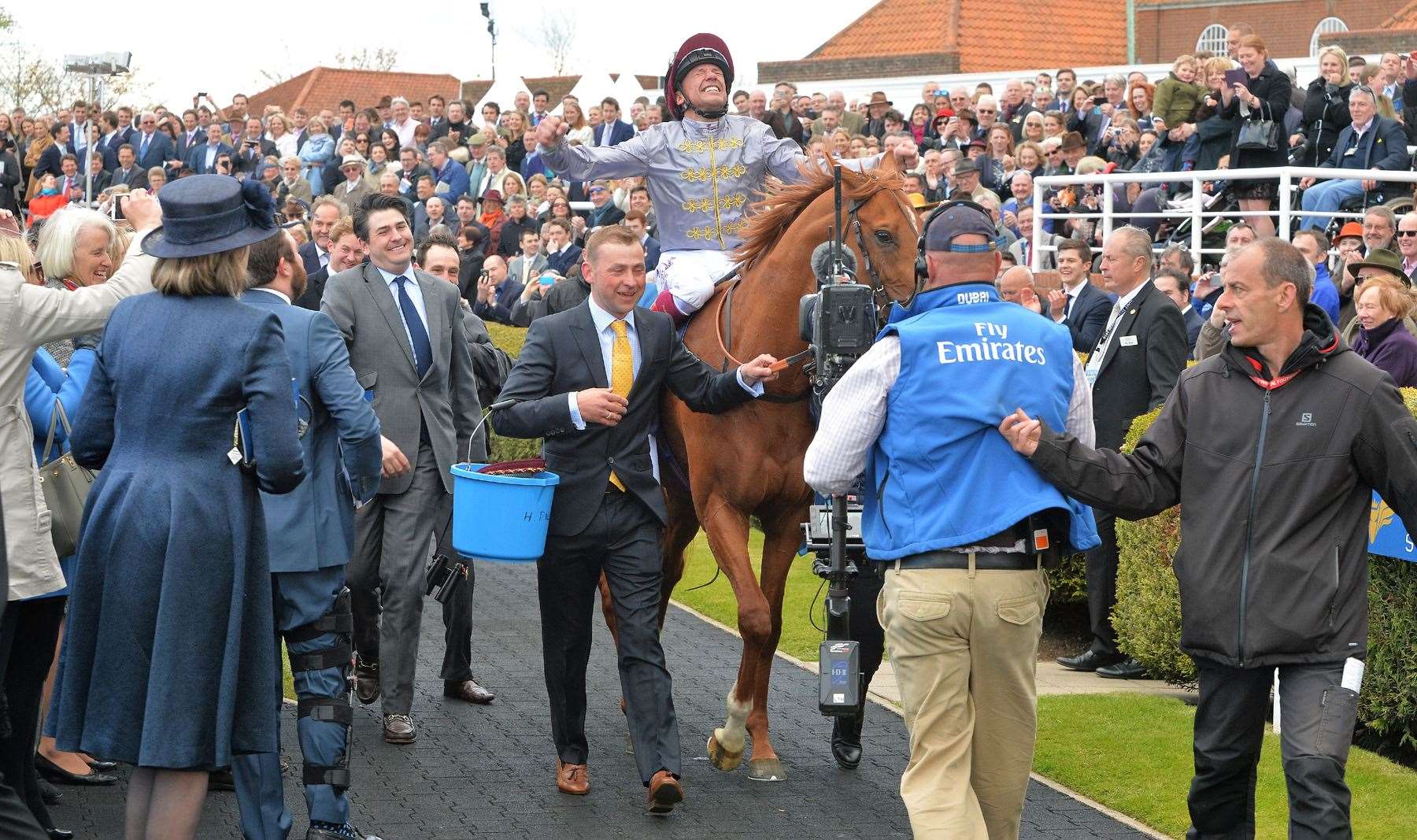 Watching in his position from just below the Royal Box, there is one moment Palmer recalls vividly that told him his horse had a big chance.

“Everyone had decided the short-priced favourite was unbeatable, but I had convinced myself he was,” said Palmer.

“I’m not sure whether my reasoning at the time was right, but we nevertheless went to race day dreaming.

“Galileo Gold had been prominent throughout and there was a moment that he disappeared from view.

“It was a only for a couple of seconds, but when they reappeared Frankie was motionless. Everyone else was already squeezing and I knew then he had a real chance.

“He just went for it and ended up galloping all the way to the line.

“Frankie never thought it was in doubt. When you watch a race back with Frankie, don’t let him have the control! He hits pause after four strides and tells you everything – it takes an hour to watch a mile race!

“But what a ride it was, Frankie did it with a lot of confidence.”

And rather uncharacteristically, Palmer was largely mute throughout the one minute, 35.91 seconds, which is the second fastest winning time of the 2,000 Guineas in the last 10 years.

“I couldn’t quite believe it. I didn’t shout once. I normally shout because I’m encouraging the horse to win, but I didn’t feel like I needed to do it,” he said.

“There just didn’t seem to be any enormous need – the control was there for all to see.

“There is a picture of me afterwards with my hands over my face. I knew the horse was good, obviously Frankie is so good, but there was still so much disbelief we had done it.”